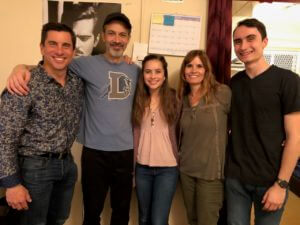 Recently, on a family trip to New York City, I had the opportunity to see a unique and wonderful Broadway musical called The Band’s Visit. It tells a simple, yet beautiful story of an Egyptian band who visits Israel by invitation to perform and, mistakenly, arrives at the wrong city. The injection of “something different” into this unsuspecting town causes, for those who live there, a chance to shift perspectives. And in the unfolding of those encounters, we get to experience moments that are deeply touching, laughter that surprises and heals, and music … oh the music … that weaves poignant stories and lingers long after the curtain comes down. 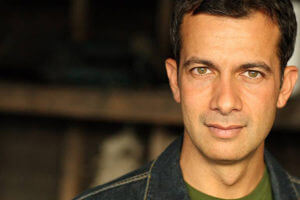 I had the chance after the performance to visit with Dariush Kashani, who currently plays the starring role of the band leader, Tewfiq. Sitting in his dressing room, along with my wife and teenage children (all huge theater fans), we talked of life and learning, and of the challenges and mindset necessary in the pursuit of future stages.

DT:  Dariush, that was an amazing performance. Congratulations on your career, your critical acclaim, all of your movie credits, your TV credits, and now your second starring role on Broadway.

DT: I mean, this is the biggest stage in the world for what you do. It has to be amazingly satisfying.

DT: My question for you is, how is this stage, or the moment you step out on this stage, exactly like what you started doing at the beginning of your career when you found your passion?

DK: How does this experience mirror my experience when I first started? I would say that, both then and now, I had people who believed in me, who were present and were front and center push me forward. It has always been that consistent. So for example, when I was young, I had my high school drama teacher who saw me as kind of a wallflower, and he just kind of pulled me off of the wall and said, “I think you should try this.” And my parents, who have now passed away, were thrilled because I was now doing something that they saw made me happy. I mean, not to give you the wrong idea, but I became popular very quickly at school because I was able to do these plays and was good at them. And then, after a lot of time passing, a lot of lean years, after my parents passed away, I found myself once again all of a sudden surrounded by people who I had known for awhile but were finally like, “We think you’re ready. You’re ready.” I had my manager, and the casting director for The Band’s Visit, called my manager one day and said, “I think this would be a really good idea for you to do this.” Of course, I had to audition, but everything just sort of lined up.

DT: Where did you get the confidence to know that you could do it?

DK: The confidence came from self care. It came from going through many, many years of struggle, and then realizing that the only person who could kind of … put me together … and make me prepared for opportunities was myself. So, I would just take care of myself. I would do yoga. I made sure I was eating right. I saw a therapist. (Laughs) You know, all these things, because I wanted to feel good about myself so that when the opportunity did come, I wasn’t experiencing a lot of static. I’m sure that makes sense.

DK: You know, so that I would have a clear feeling when I’m about ready to do something.

DT: The excitement that you feel before you go on stage – is that the same as it always has been?

DK: It’s different every night, and it’s based on what I’m feeling today. So for example, if there’s a day when, I mean look, we’re all human. If there’s a day when I’m feeling a little blue for whatever reason, I accept it, and I take that out there with me. Because if I don’t do that than, in my opinion, I’m giving a canned performance. So I deal with the reality of what’s happening. Tonight, for instance, I knew that you guys were here, and I had other friends who were here and I was very excited to share it with everybody. You know? So that gives it another little kind of nudge. Yeah. And like the night my wife came, I was really nervous, so I had to incorporate that in there, somehow.

DT: And as a performer, that nervousness never really goes away, does it?

DK: It never goes away.

DK: Yeah. It’s not like the nervousness like you’re about to be executed. (Laughs) Not that nervousness. But it’s like the excitement that you have no idea of what’s going to happen, even though you’ve done it before a bunch of times. But what you do know, is that the piece itself is filled with so much hope and joy and emotions, and you just have to trust just to step out there and ride it, and it will take you. And that’s what makes it exciting. It’s that something is going to take you.

DT: Earlier you told me about the passion that you had for being an artist, for theater, for discovering your uniqueness, and how it served to overcome some very difficult years, when the odds were not in your favor. Can you talk about that?

DK: Absolutely. I was taking care of my father after my mom passed away and all of a sudden my career came to a screeching halt. There was nothing going on. This was probably almost three years of nothing.  And I just kept on thinking to myself over an over again like, this all means something. I don’t know what it means. What I feel is, I’m at a dead end. But I know that there are no dead ends, so whatever this feeling is, I’ve got to find a way to push through. And one day, I just woke up and I’m like, I have to change this. I just can’t keep waiting. I have to change it. And I went and talked with my dad, and I said, we’re going to sell the house, I’m going to send you to North Carolina, and I’m going to move on with my life. I’ve been taking care of you for three years. I hope you’re happy. But you know, when somebody is grieving and in a state of grief, that energy really does surround you and surrounds everybody, and we were living in grief for three years. And I just had to like dig, dig so deep and come up with a plan to get out of this. And we sold our house. I flew to New York to audition for something. I got the job. I flew back we packed everything up. The house was gone. My wife and I moved back to New York, and it took a bold, bold risk – a risky move to get me to where I am now.

DT: Both my kids pursue ambitions for performing arts – music and theater. It’s tough road, and I know that on your road you’ve had to overcome your ethnicity, which worked against you for some ways.

DK: For a long time.

DT: Tell me about that and, in general, about tenacity. It’s like a funnel of so many people who want to do what you do. They have a dream and come into the business by the thousands every year. And yet, so many of them quit. What’s your story?

DK: I moved here [to the US] when the hostage crisis began in 1979 with my family. We lived in Iran. So we came to Washington, DC, and my parents sent us to a Catholic elementary school. And so, immediately, the experience of being an outsider was very visceral and very alive. And it took a very long time to get accepted. So the seeds of determination were, I think, planted back then. Because I was a minority or in a minority, that I would have to work harder and try harder… for everything. Everything from getting a kid to play with me on the playground to going into the cafeteria and being able to sit with the kids I thought were popular. It was horrible. (Laughs) You know, but I tried and tried and tried and, eventually, everybody was OK with me. And then, when I got older and moved to New York, I began to experience the same sort of feeling because I was ethnic, and there were no ethnic parts that were substantial. Everything was like really small roles like cab drivers and like guys who worked at bodegas, and stuff like that. And I was not discouraged because I knew that, at least plays, perhaps unlike TV shows, plays would offer some understanding of being flexible with hiring someone who was not, you know, white, for lack of a better word. And even though that took time, that was the avenue. Theater was a little more accepting back then. And when 9/11 happened, that changed everything. Because all of a sudden, if you were Middle Eastern you were pushed onto a world stage and they started writing material as a response to everything that was happening to Al Qaeda and to terrorism in general. And, unfortunately, that launched my career. I started playing guys who were terrorists. Guys who they thought were terrorists. Guys who could be terrorists. Um. And when that world opened up and I started meeting casting directors and working on certain TV shows. And I thought to myself, I hope this is not going to be how it is. And then, I was determined to make what was a very conscious decision at a certain point to turn those parts down and say, “No, I’m not going to do that anymore.”  If you want me to have an accent, then I need to be intelligent. I need to have a family. I want to see the family. I want to have a real job where I’m not, you know, planting a bomb, and be integrated as a member of society where I’m not being frowned upon. And so now, I’m in this play, The Band’s Visit, and it’s very much about people who have families. People who have lives. People who are integrated in society. There’s not one mention of terrorism in this play. Not one mention of any of that.

DT: It’s a beautiful play. And you are fantastic. I wish you continued success. Thank you for your time and your friendship.

DK: Thank you, as well. Thank you.