It all came down to the flip of a coin.

Do you remember the moment you made the choice to fully engage your profession and become a serious player? Have you even made that choice – to fully test your abilities, learn, grow, and contribute your best efforts? 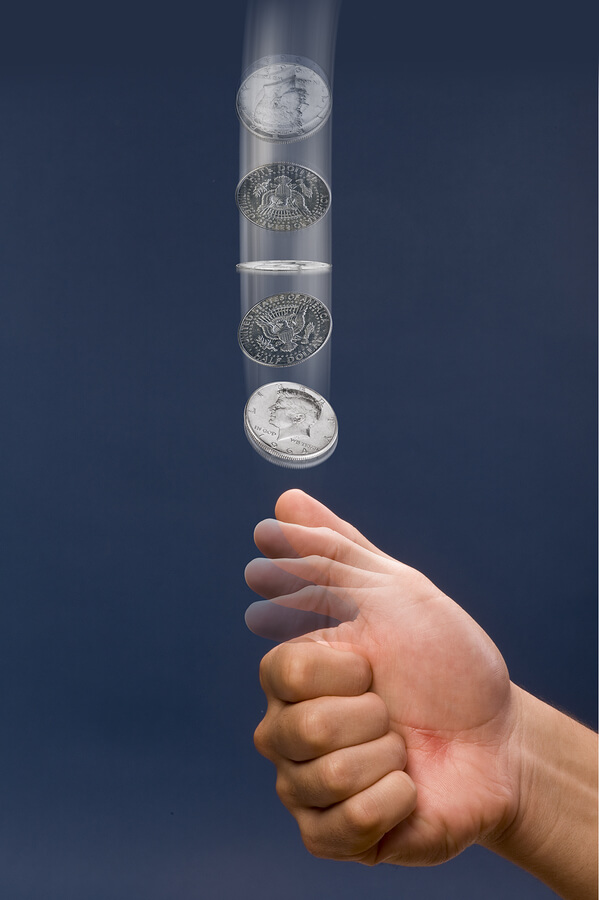 I was eleven years old and had a month earlier learned how to juggle at the King Richard’s Renaissance Faire. I had a fabulous teacher, Mike Vondruska, and the encouragement of my parents. But I was practicing purely for my own enjoyment.

One day at the festival, while standing in front of my mother’s art booth, tossing beanbags into the air and sporting a stylish Robin Hood outfit, my concentration was broken by three near simultaneous events: a man’s voice, the high pitched ring of metal, and a flash of sun lit sliver. The man’s words, “Hey kid, catch!” caused me to collect the beanbags and turn my attention in his direction. It was then I registered the ring and the flash, as he had flipped a 1976 Eisenhower silver dollar in a beautiful arc from his thumb, into the sky, and in my direction. Instinctively, I caught the coin, then glanced upward to meet his eyes as he uttered four more words. “Now you’re a professional.”

The man turned and left before I could even understand what happened, much less the significance of the moment.  I alternately glanced between his receding form and the coin in my hand, and once comprehending what he said, formed a question in my mind. Is it really that easy?

Is the mark of a professional simply the exchange of money? If so, any form of employment entitles you or me to the status of a “pro.” But I sensed, even then, that there was more required to achieve and earn the status. I contemplated this, perhaps for a few seconds or maybe a minute. Time had become irrelevant. Eventually, I pocketed the coin and decided that the man was right. I was, or soon would be a “pro.” And it changed everything.

That decision to go from amateur to pro instantly changed the way I practiced. I started taking better care of my props. I interacted with the entertainers at the festival differently. They had suddenly transformed into role models, and I studied them, asked questions, and took everything about this exciting world much more seriously. I was, after all, a part of it. I was, or soon would be, a pro.

After becoming an assistant to my mentor, developing new material, and honing my own act, within a year I became a resident performer at the fair. The exhausting days left me covered in dirt, which swirled around the festival site. And while unfolding and counting sweaty dollar bills at the end of the day’s shows, sore and spent, I realized a profound truth. I loved it. There was nothing more rewarding than spending a few of my freshly earned dollars, among my fellow performers, enjoying a Sassafras Root Beer and ice cream sundae. Thinking back, more than three decades later, it is astounding to realize how much of my entrepreneurial mindset, work ethic, and passion for learning was forged on those festival grounds. For that I’ll forever be grateful to my teacher, and to the stranger who changed my self-perception with the flip of a coin.

Are you a Pro?

Rededicate yourself to the mastery of your profession. Regardless of what your job is, elevate your commitment to performance and contribution. Learn from the best. Choose professional peers who will stretch you beyond your current understanding and ability. And, above all, drink in the enjoyment and satisfaction of expending serious effort, learning valuable lessons, and hanging in the company of those you admire.